skip to main | skip to sidebar
VIERNES, EL ONCE DE JUNIO, VEINTE-DIEZ
I painted the ex-voto on the left while in Las Vegas. I based the figure of Christ on an ex-voto I had recently purchased from Jim Caswell at Historia Antiques in Santa Monica. The Christ-figure is commonly known as El Cristo Negro, the origin coming from a vision of a dark-skinned crucified Christ in Guatamala in the 1500's. A crucifix of El Christo Negro was commissioned later that century in honour of the visitation. Another possible reason for the name is that years of worship in the tiny hut would have coated the crucifix with a patina of candle soot.
Unfortunately, the text on the ex-voto on the right, painted in 1940, has disintegrated as it was written in ink. This shows that the ex-voto was part of a production line of images painted, then the devotion was added at a later time, after the client had selected which saint to make their devotion to. 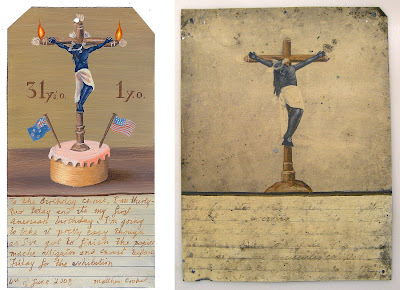