skip to main | skip to sidebar
MIERCOLES, EL VEINTISEIS DE ENERO, VEINTE-ONCE
'Family Portrait', 2011, oil on metal, 8in x 10 1/2in.
One of my favourite paintings so far this year, mostly because of the colours of the background and how they relate to the figures and forms. I resisted putting too many forms in this painting, especially as it's a family portrait (which in my family are only taken when EVERYONE is home). There are familiar symbols, the Liberty/Zelandia figure with the Parthenon head, the bees, my Great Grandfather's Rotherham pocket watch, the Southern Cross and the Eye of Provenance. The text, 'Historia Luget' comes from an inscription of the tomb of Leonardo Bruni in Santa Croce in Florence, Italy, a moving two words, that can be taken in a 'glass half empty/half full' kind of way.
The camera is starting to reappear in my paintings too, mostly because of it's 'birth' is so close to that of New Zealand's signing of the Treaty of Waitangi. In several new paintings, the camera signifies the birth of a nation, which in turn has sparked off many new ideas on that topic. One o the initial pattern recognitions was Griffith's early 1900's film by the same name. 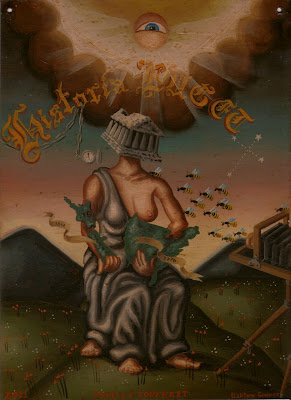 laboriously added by MATTHEW COUPER at 11:07:00 AM 0 comments