skip to main | skip to sidebar
DOMINGO, EL VEINTITRES DE ENERO, VEINTE-ONCE
A photo taken by JK Russ of me painting, probably about two-thirds through a bigger painting. This was taken a couple of weeks ago and I've just about finished it. It features references to Sassetta's St Anthony Tormented by Demons and Chardin's Le Singere (both works I've referenced in the past, as far back as 2002). I've decided on a title for the painting: 'The Trickle-Down Effect' which will make sense once I've finished it and posted a photo of the finished painting. 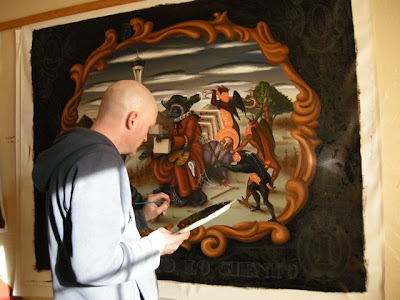 laboriously added by MATTHEW COUPER at 10:13:00 AM 0 comments