PG Contemporary is pleased to announce Guns & Skulls, a pairing of artists whose 21st-century takes on two traditional mediums - ex-votos and Delft ceramic painting - offer sly new perspectives on the timeless themes of violence and death.

For Guns & Skulls, Krafft returns to the gallery with porcelain firearms wittily embellished using traditional Delft ceramic painting techniques. The results are what Krafft has described as "a purely decorative dialogue on defense and disaster."

Krafft rebooted a struggling career as "the oldest promising young artist in the Pacific Northwest" in 1991, joining a women's china-painting guild and launching his internationally exhibited and acclaimed Disasterware series.

He has had more than three dozen solo exhibitions in Seattle; Portland, Ore.; Los Angeles; London; and Ljubljana, Slovenia, among other cities, and participated in the Venice Biennale in 2003. His work is included in the renowned Garth Clark & Mark Del Vecchio Collection, which the Museum of Fine Arts, Houston acquired in 2007.

New-Zealand born, Las Vegas-based painter Matthew Couper has been described by art historian John Seed as an "artist with a Kafkaesque view of the world" whose imagery suggests "a pagan Catholic Cirque du Soleil."

Known for putting a contemporary twist on a style associated with Spanish Baroque colonial art, Couper brings the symbols and narrative vocabulary of ex-votos - small devotional paintings on tin - into dialogue with sources as diverse as African power figures and Russian Suprematism. His work in Guns & Skulls will also include two large-scale paintings.

"Like any good Johnny Cash, Nick Cave or Pixies song, you've got to have sex, death and religion fueling the fire," Couper has said. He has exhibited extensively throughout New Zealand as well as in Los Angeles; Brooklyn, N.Y.; Santa Fe, N.M.; Barcelona; and Hong Kong.

Both artists will attend the opening reception from 6:30-9 p.m. Saturday, May 26.

Gallery hours: Thursday to Saturday 11am to 6pm or by appointment. 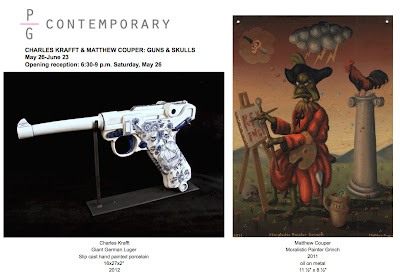